Biggiest cons of the smart controller?

I am gonna get the smart controller sooner or later, what are the biggest cons of the controller

It's not worth the money, but it's worth buying, if that makes sense.
The screen really needs to be 7" and 2000nits, but apart from that, I can't really complain about mine so far.
Expand signature
"Now with 20% more superfluous pleonasm!"
Reactions: Skyflyer129, ZooCougar and Thomas B

Seem to be a few limitations compared to my CS. But as stated above the screen is like a small cellphone. I’ll consider one if they get a 7+” screen. ... I really love the large screen on my CS.
Reactions: JS1600, gfieldsr and Filipok

Two major ones for me, the USB charger is currently irreplaceable. Even DJI can't source them for you if you have to replace it, the other major problem is that the batteries are sealed so I expect to see a small cottage industry pop up in the next few years servicing them when the start to fail at the 2 year point.

While using it, you will always be limited to an Android version of GO 4, custom written for the SC, which is usually the last to receive updates. For a happy DJI experience, stick with iOS GO 4 and get a full sized 9.7” iPad and a hood, if you need to see in the sun. The SC screen is too small.
Reactions: Chrislaf, Concern and Filipok
M

I think my biggest Pro for me is that its a all in one solution, My only con for me personally that it runs on android
Reactions: Skyflyer129, Starz and JS1600
G

Michael Miranda said:
I think my biggest Pro for me is that its a all in one solution, My only con for me personally that it runs on android
Click to expand...

Totally agree! Similarly, I loved the simplicity of the P4P+, but couldn't deal with the buggy Android operating system that ran it! Returned it for the P4P and used my full sized iPad instead. Currently using the much larger 9.7" iPadPro with both my M2P and M2Z, and loving the reliable iOS GO 4 version, which always gets all improvements and bug fixes first!
Reactions: Concern
G

Android Go4 has been perfectly stable for ages now. Its simply not an issue.

For me the Smart controller cons are (i) it could be brighter. Yes i can see it in direct sunlight (unlike any tablet on the market even with bulky hoods) (ii) the screen is really reflective so a matte screen protector is helpful (iii) a version with a bigger screen would be nice.

Overall for me its a useful improvement. Set up times drastically reduced, performance is great and i can actually see the screen without having to try to find shade to stand in.
Reactions: MRomine, tmtwomey, Danr-62 and 3 others
G

gnirtS said:
Android Go4 has been perfectly stable for ages now. Its simply not an issue.
Click to expand...

I was referring to the P4P+, CS, and SC customized versions of Android GO 4 which are hardware specific, rather than the generic Android GO 4 which is device independent, and stable. Please correct me if the SC is now using the Play Store version of Android GO 4, as I have never used one to know if that aspect has changed. If so, that would be a welcome change!
G

The SC itself is using a customised build of Android 4. Not great security wise but its not going to be an internet connected device or anything so its not a big issue.

Go4 is harder to tell until they release a new android one to compare update times or release.
At the very least its skinned though, different backgrounds, different fly now icon and labelling etc. I get different wording on prompts downloading some content from the drone.
It maybe a skin (which can be supplied in a standard play store go4) or now.
SC doesnt ship with gapps or play store either so its not getting the same program from the same source.

DJIs biggest failing is software and its insane that its update policy isnt flagship first, everything else secondary. IT SHOULD be Crystal Sky/SC first, then the non DJI devices (with all platforms released at the same time). In a sane world.

Currently at least my SC Go4 and Android Go4 both show identical version numbers and there hasnt been a new release since ive had the SC to test. Like the Go4 version on android, its rock solid and just works with no issues at all. Both platforms just get on with the job without issue.
Reactions: V2Rotate and irfl
G

gnirtS said:
DJIs biggest failing is software and its insane that its update policy isnt flagship first, everything else secondary. IT SHOULD be Crystal Sky/SC first, then the non DJI devices (with all platforms released at the same time). In a sane world.
Click to expand...

Thanks for the clarification. Totally agree about your "IT SHOULD be" above! When writing GO 4 for your own known hardware, why is that always the last one to get updated, and the buggiest at the outset? Makes no sense.
D

The only con for me is the small screen but since it has an hdmi port, I can add a larger display for either myself or a copilot if need be. I've had no problems with the android operating system on the sc.
Reactions: gspell
V

Only con for me (being a new user to the Mavic 2 Pro) is that it does not come with a lanyard. After a while of holding it, it gets a bit warm (not hot) and my hands begin to sweat. I'd like to wipe my hands and not fear dropping the controller because it slipped.

vciavarelli said:
Only con for me (being a new user to the Mavic 2 Pro) is that it does not come with a lanyard. After a while of holding it, it gets a bit warm (not hot) and my hands begin to sweat. I'd like to wipe my hands and not fear dropping the controller because it slipped.
Click to expand...

If you go lanyard route - I prefer two point connection. With a one point, as you bend down or forward the controller will tend to rotate possibly leaving the screen/sticks against your body.
Reactions: Wilbur
B

Biggest con for me is that it does not automatically links to my iPhone’s Wifi for internet (even if it is the same known SSID and password).
Reactions: brent10

If the screen was larger and/or brighter the battery would have to be larger too and the unit would be really bulky. It would of course be nice if DJI would offer a larger one but personally I would choose this size even then.

A standard Android release with Play Store would be nice but I doubt it would be as stable as the current solution.
Reactions: globetrotterdrone and ff22
G

ff22 said:
If you go lanyard route - I prefer two point connection. With a one point, as you bend down or forward the controller will tend to rotate possibly leaving the screen/sticks against your body.
Click to expand...

I paid $5 for a neck strap using the bottom screw holes. They're a standard thread so any will work.
I'd rather it was brighter but its still a big improvement on any tablet so i cant have it all.
Reactions: Hank Fink and ff22
L

The biggest con besides the price (which is outrageous) is that after that large investment, you will have to buy another for the Mavic 3. You know that DJI will not make the new Mavic compatible with the older controller.
The CS has a larger screen and is brighter and should work with later controllers. It is just not as convenient.
G

As far as convenience, I keep the 9.7” iPad Pro permanently mounted onto the RC, so everything is ready to go, attached to a lanyard, with a quick release, so I can also set it down, without pulling everything over my hat, while unfolding the M2 and turning on the battery. I turn on my iPhone Hotspot, and the iPad grabs the phone internet connection for maps, I reattach the quick release, and I'm ready to turn on the M2 battery. I carry the RC in a separate lightweight Adidas sports backpack with a nice carry handle on top. Not quite as small and compact as the SC, but far better and cheaper for me, with a much larger screen. Fits behind the front passenger on the floor, next to the Smatree M2 soft-sided case.
Reactions: Greenflash and Concern
V

Citizen Flier said:
There is an excellent aftermarket neck strap! 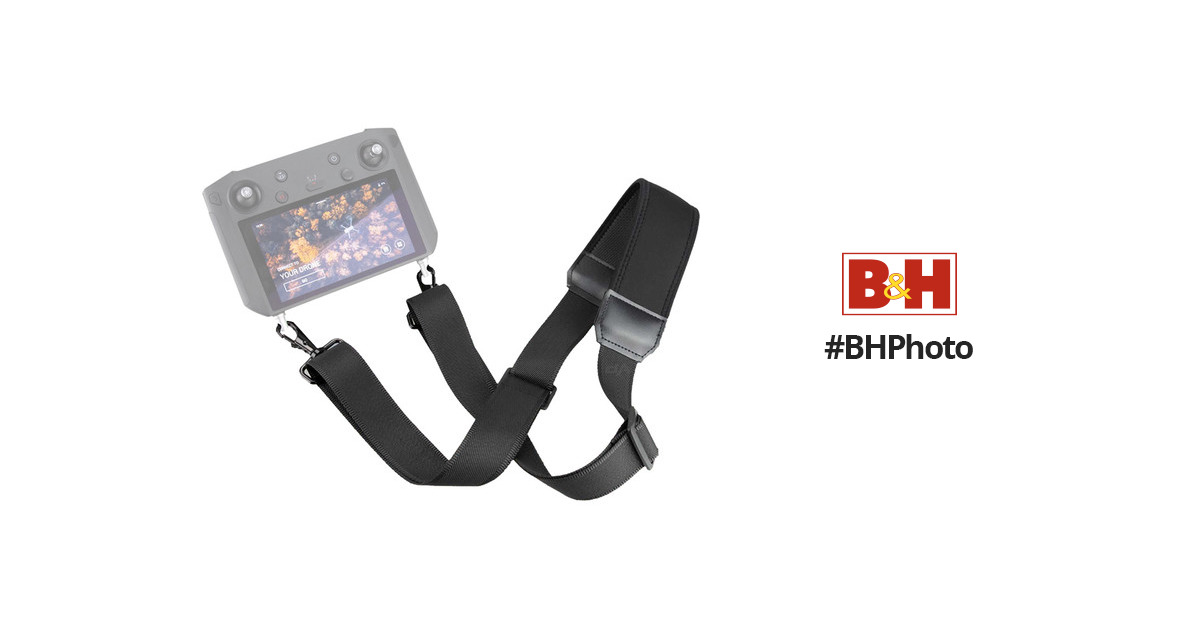 Plusses for Smart Controller: I've heard about smart phones disconnecting from controllers. I have not had any failures with Smart Controller. Screen is bright -even in bright sun. Having both devices made entirely by DJI sounds more reliable to me than adding a third party device to the mix. I don't even know what happens if you get a call on a smart phone while flying -? A larger screen would be excellent, but as a new flier I give the SC thumbs up.
Click to expand...

Thanks for the info - I'll check that out when I get home later tonight.
Log in or register to join the discussion