I'll be using the template from the sticky post, but first, the full story of the issue:

Today I was hovering around 100 feet when the camera feed jumped around. It was only for a second and then it stabilized again. I was confused but kept flying. Then it happened again. And again. At that point I aborted and pointed it in a beeline for where I was standing and it kept getting worse; by this time I could see it clearly and saw that it was intermittently hovering fine, but would occasionally, for lack of a better descriptive term, tumble. As I got close enough I could hear a plastic on plastic whackwhackwhack and did my best to set 'er down; wound up landing on one side but at very low speed so no damage. Examining the drone I found this: 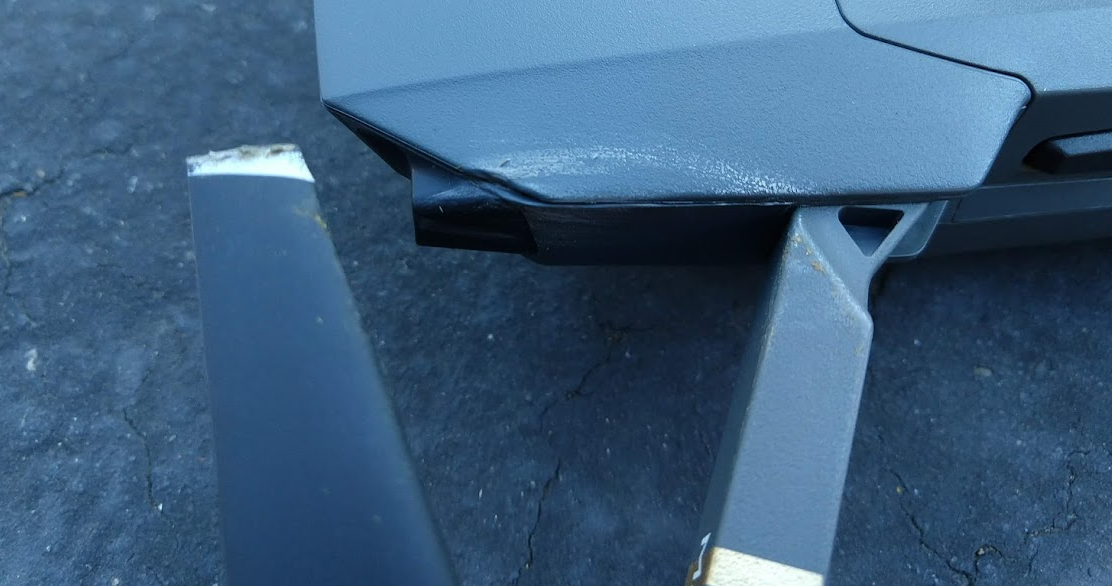 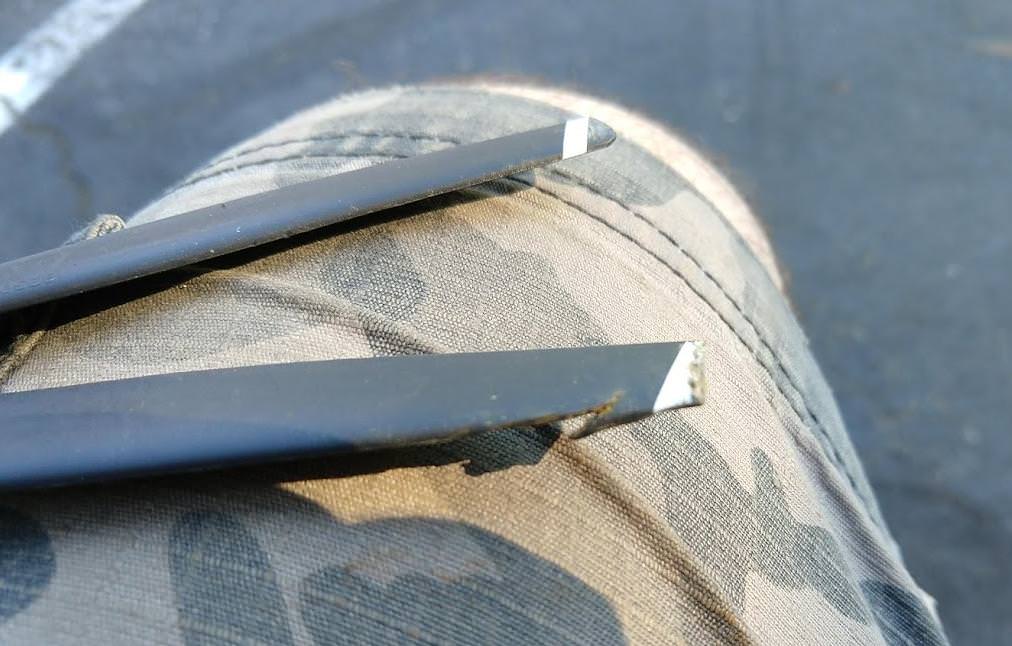 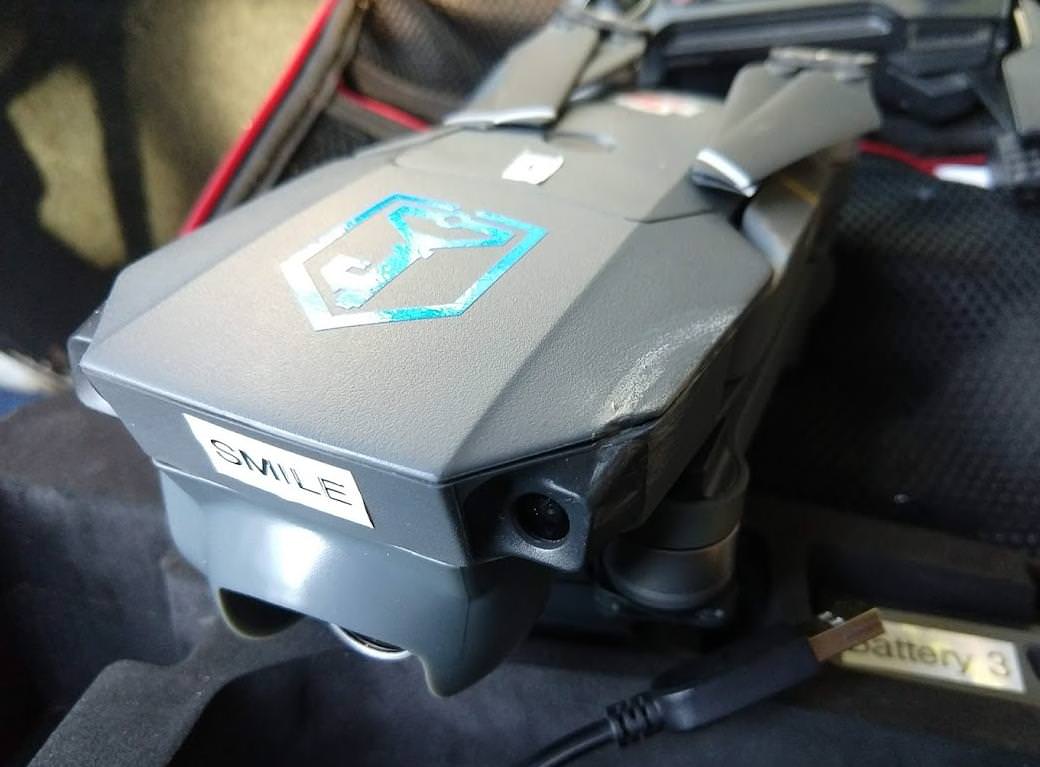 There is no flex or looseness in the arm or motor that would seem to allow the prop to contact the body like that, and I was well above any obstacles in the area when this started so I couldn't have hit anything, and if I had noticed prop damage like that before they flight I wouldn't have flown the prop. Upon landing that motor was noticeably warmer than the other three.

I replaced the prop and conducted a test flight with no recurrence of the issue, but I'm still paranoid.

My THEORY is that a bird flew into the prop (my initial tumble) and damaged it in such a way that altered its aerodynamics and, under the right conditions, forced it down until it contacted the body, at which point it stuck briefly and caused the drone to tumble, then it broke loose and the drone was able to stabilize again, but every whack into the body made it worse. However, I'm curious if anyone else has experienced this sort of issue.

Was unit in a crash? As a result of this issue, not prior

What have you tried so far? Replaced prop

What firmware are you running ( aircraft, remote controller)? Don't recall offhand but I have left it at the version it shipped with last April on the advice of many others

Did you change anything or install any apps? No recent changes

Do you have a video or pictures of the problem? Was not recording at the time, images of damage provided above

This has happened to some as a result of aggressive flying in sport mode. Causes the props to flex under load and contact the body. The only other thread I remember about this issue the Mavic had a cracked bottom plate or something like that. It was visible in pictures of that arm at the body connection in that case.
Reactions: Former Member
S

I wasn't in sport mode at any point during this flight.

I don't see any damage in that area: 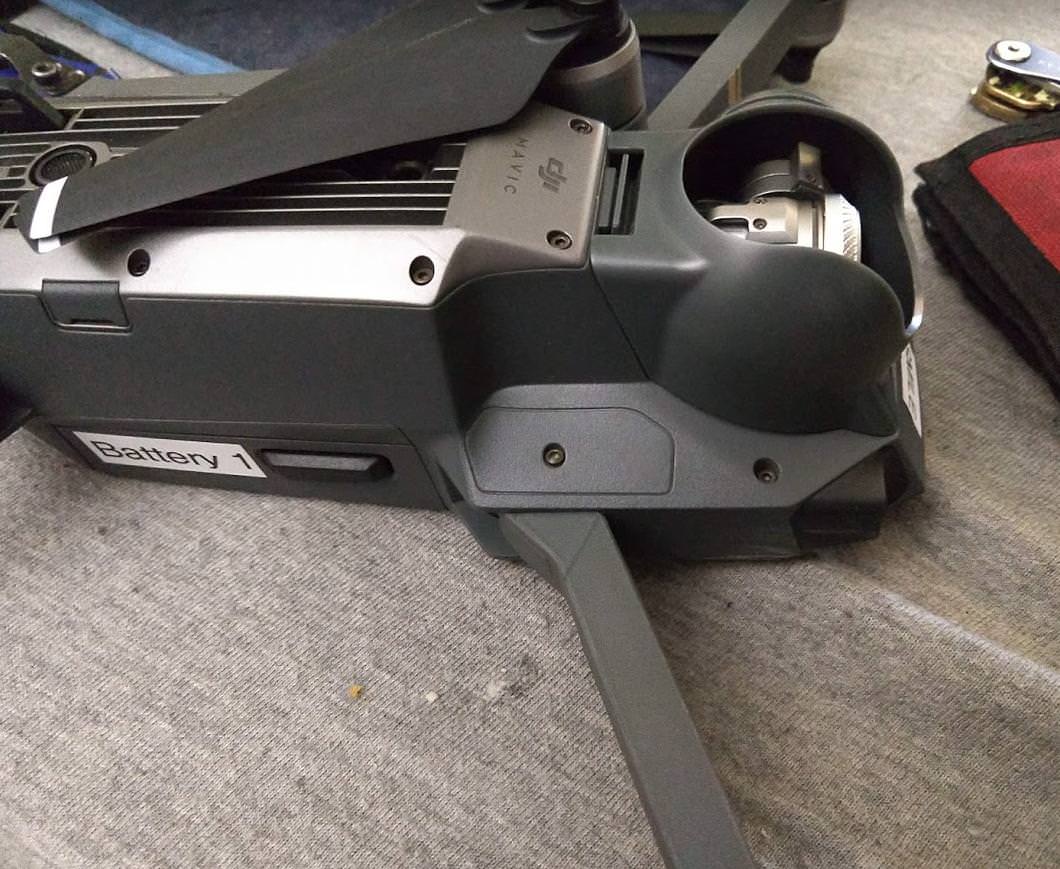 I do use sport mode occasionally, but only to get from A to B faster, I don't do any acrobatics or whatever the kids are into with these.

Yes, all 4 props were purchased along with the drone from the Apple store when I bought it.
S

This piece is loose. 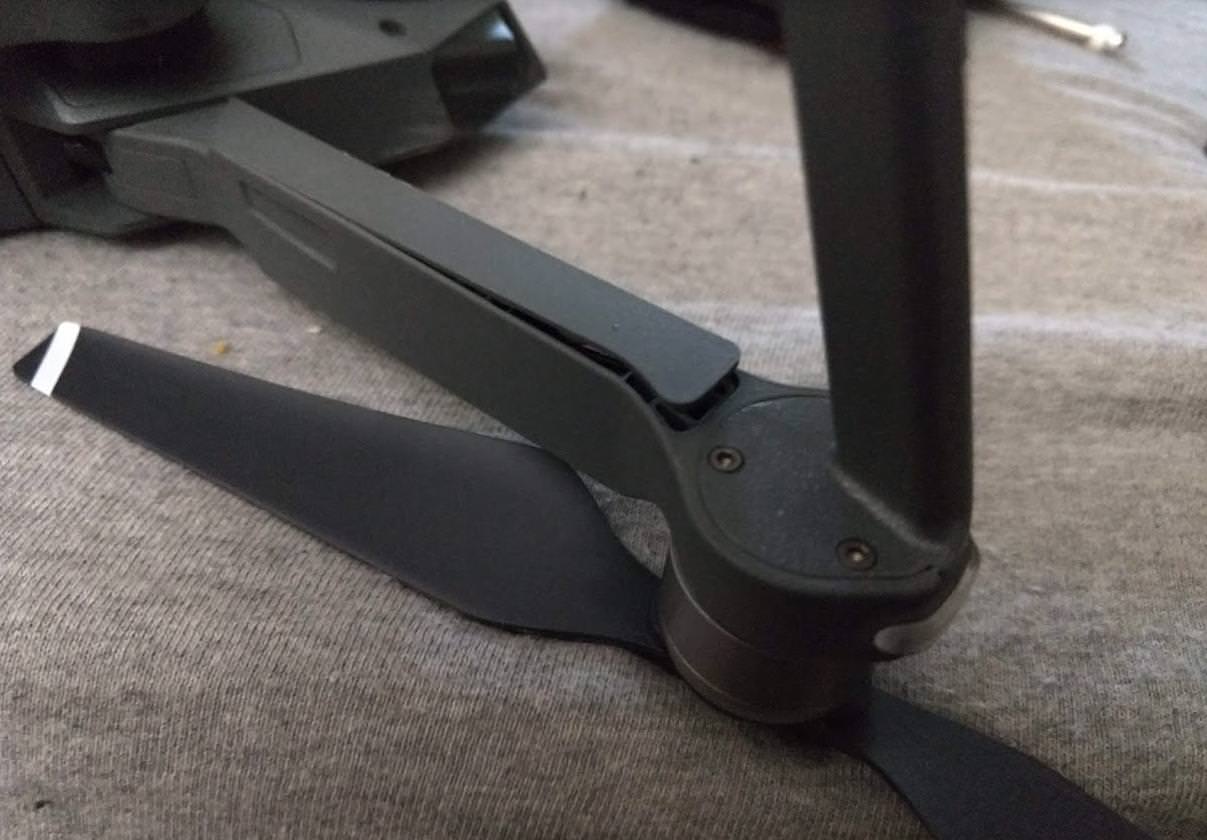 You must have hit something then. Wondering what the brown stuff on the broken prop is? Also looks like the brown stuff transferred to the arm it was hitting. Maybe a branch, or dirt, or a non colorfast brown bird?
S

There's dirt and grass from how it landed; if it hit a branch where it was, the branch was dropped from orbit.
S

Can that piece be glued back in (it appears to have been glued originally) or is that arm toast?

I am not sure! Lets see if @Thunderdrones can comment. He has fixed more drones than I have even seen.
S

Hope he does! The arms aren't too expensive on amazon; are there problems with counterfeits on there?

I did have a minor crash a few months ago.. lost GPS about 18 inches off the ground and drifted into a wall, drone flipped and landed upside down. No damage but four ruined props. I don't recall if it clipped the wall with the side that this happened on. I've flown without issue many times since then, though, wouldn't imagine it was related.

Yes, I had this issue one flight after hitting some branches. Replacing the prop fixed the issue. I now carry a couple of extra sets of props with me. The tolerance is pretty close, and the props are pretty flexible.
Toggle signature
_____
Jim Flannery, KØUNX
[email protected]
Jefferson County, Colorado
Annoying Control-Freaks Daily!
F

skiddyfisk said:
wound up landing on one side
Click to expand...

Thank you for mentioning me @ac0j

OP. You might be able to glue that piece back into place, but a permanent fix would be to replace the whole arm, which is what I would do. The motor was turning when it struck the body, so I wouldnt trust that motor any more.
Reactions: bobj151 and Simmo
K

A CRASH IS A CRASH.. I bet there is something loose somewhere with the air frame hitting a wall is not minor hope you find out what whats broken.
S

OP. You might be able to glue that piece back into place, but a permanent fix would be to replace the whole arm, which is what I would do. The motor was turning when it struck the body, so I wouldnt trust that motor any more.
Click to expand...

Is the loose part load-bearing? I'm curious if it's the symptom or the cause.


kidroc said:
A CRASH IS A CRASH.. I bet there is something loose somewhere with the air frame hitting a wall is not minor hope you find out what whats broken.
Click to expand...

"something loose somewhere" isn't really helpful; I've wiggled the arm and motor both extensively and I can't make the prop touch the body without flexing the prop itself.

It bonked the wall in March. Since then I have flown it on 16 separate days (some of which were multiple flights each, and some of which involved decent wind) without any incident until yesterday.

What worries me is what happened.. I was nowhere near anything I could possibly hit, so unless a bird flew into the prop or somebody threw something at the drone, a prop with so few flight hours on it spontaneously deciding to disobey physics makes no sense. There were birds around harassing it, but they've been doing that for 14 months of my flying this thing and never actually hit it before. Also no blood on the prop which I'd expect if I salad shootered a bird.
Last edited: Jun 26, 2018
S

Not that these images have told me anything, but the initial "tumble" occurred between these two photos, specifically while I was ascending to take the second. 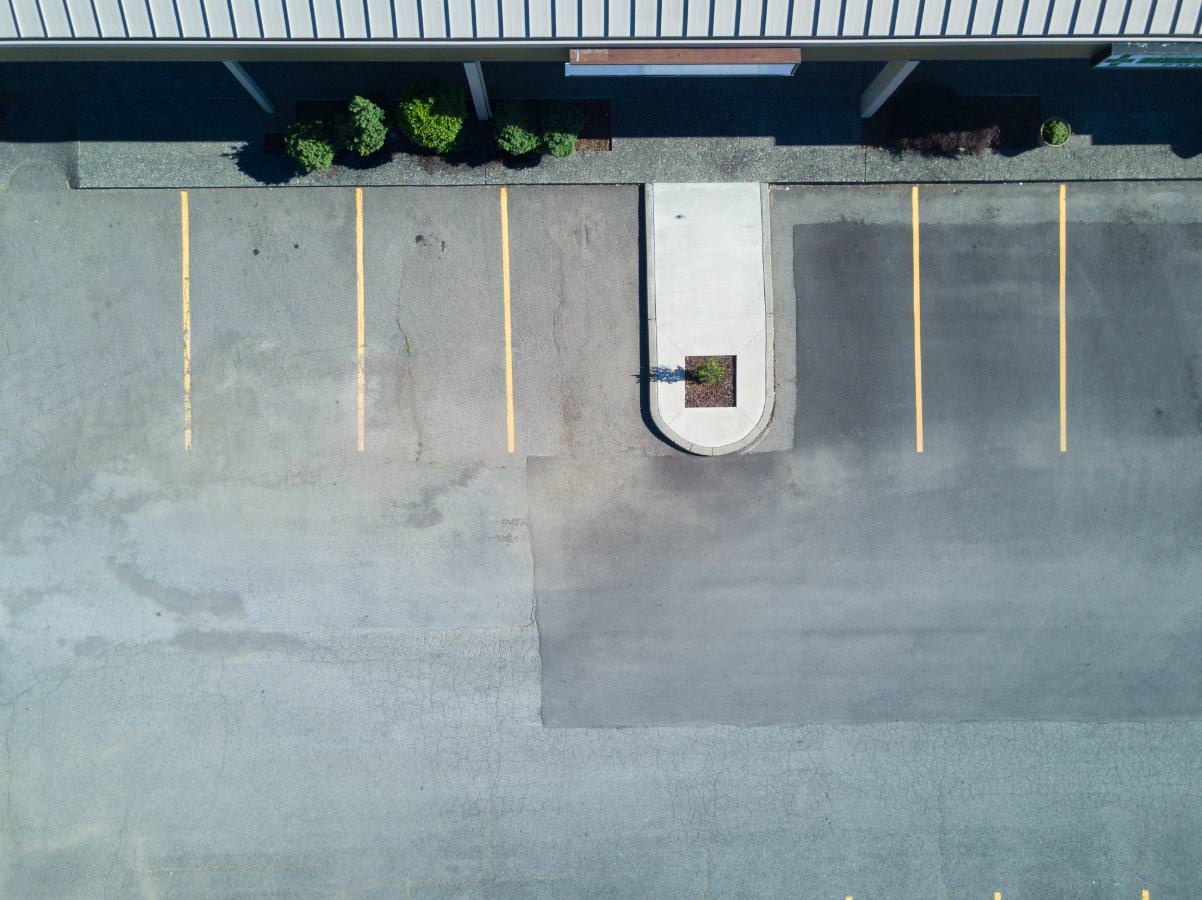 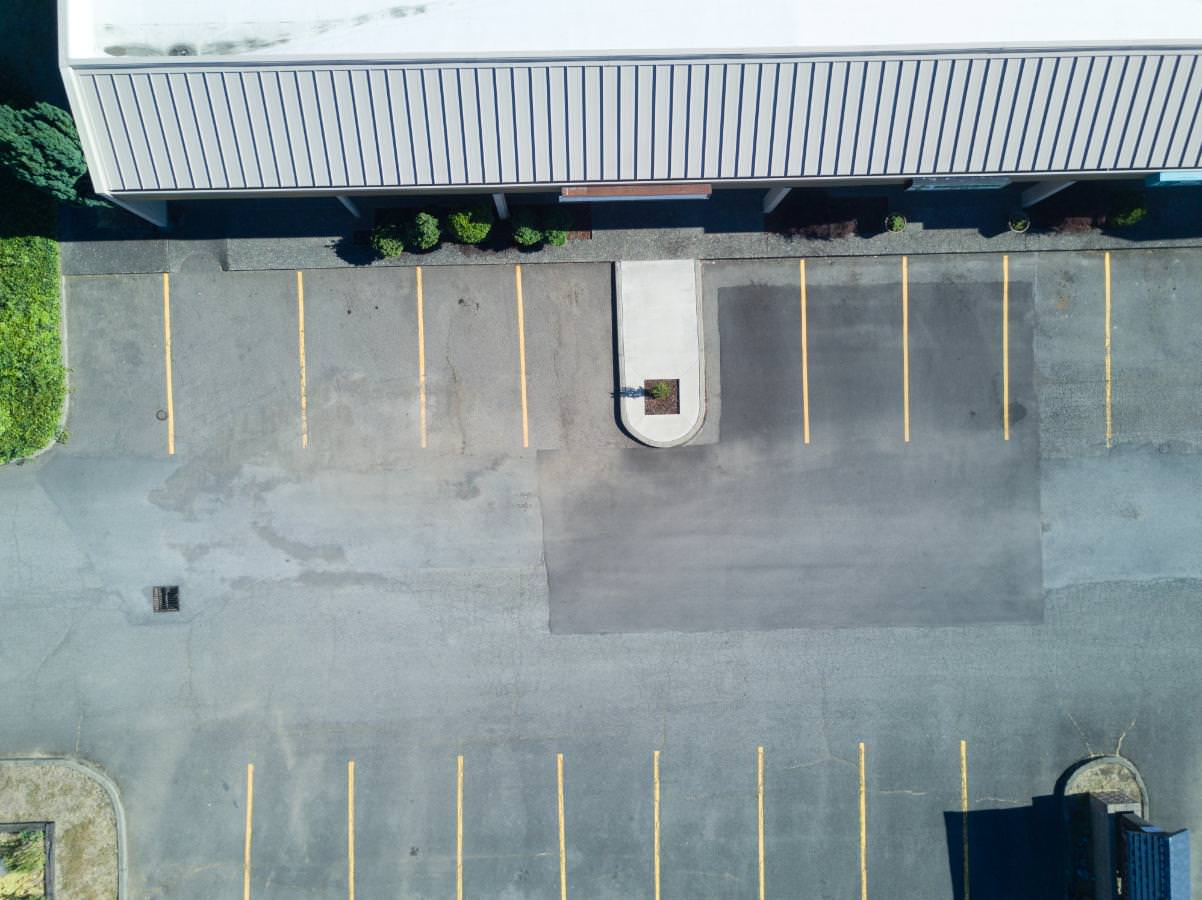 I was hoping I'd see a smoking gun like somebody holding a rock, but no luck. I did choose this parking lot to fly over due to it being empty.

Google's view of the same lot. Note the lack of trees anywhere near my location. I was 50 ft AGL and 30 feet above the roof of the building, at lowest. 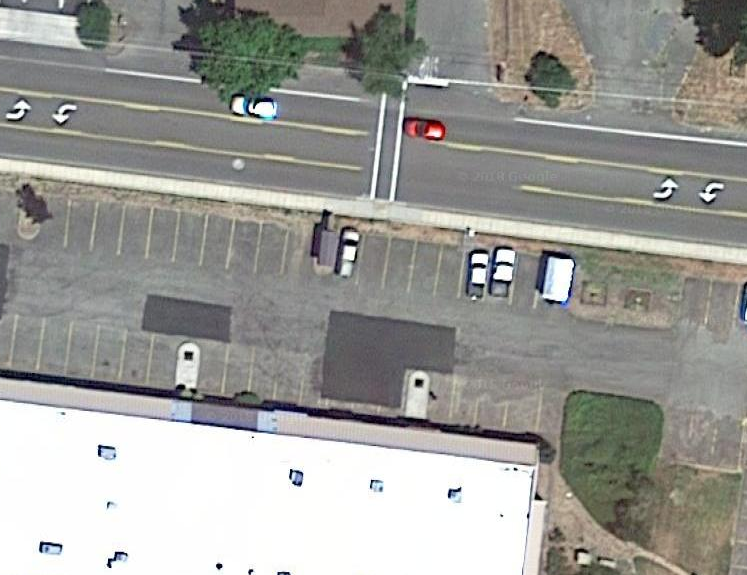 I thought about something else. The arm must have overextended to allow the props to strike the top body. Theres a pin inside the front arm joint that could possibly have gotten damaged and/or dislodged, and that could alter your thrust line. One way to check it is to remove the hatch under the front left arm on the middle fame and see if the bottom of pin is still screwed in and in place. The top part of the pin cant been examined without taking off the top body.
Reactions: Simmo
S

I took it apart that night and looked it over, didn't spot anything obviously broken or different from the other side, but I didn't know what to look for at the time.
S 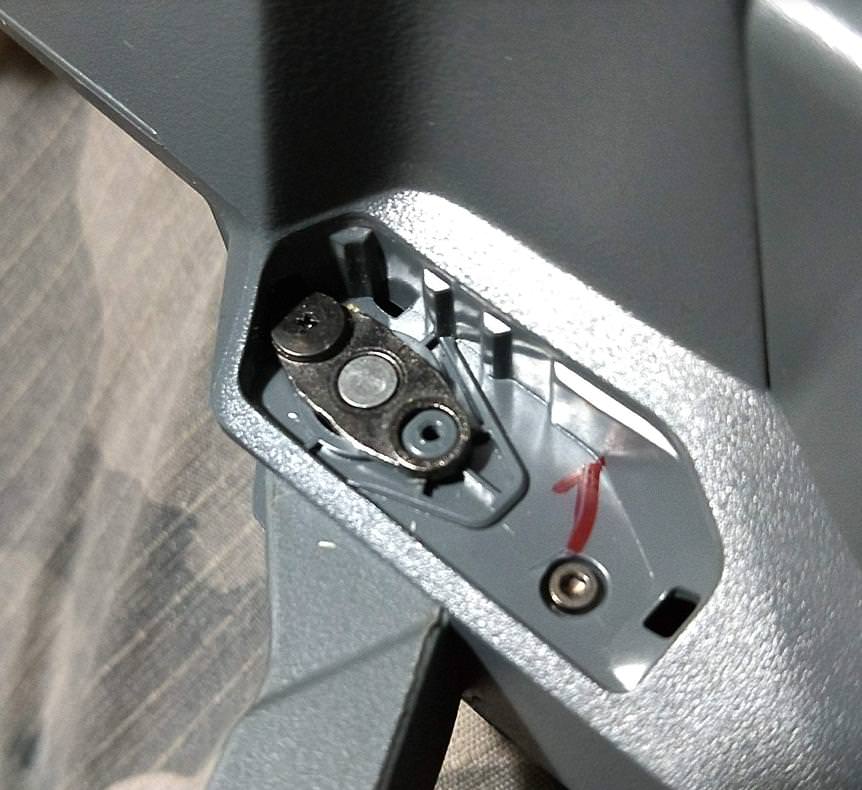 skiddyfisk said:
This piece is loose.

It looks like the loose piece allowed the arm to flex up, allowing it to strike the body with the prop.
Toggle signature
Opinions expressed are based on flying a Mavic Pro.

S
No Image to Camera after Vibration Board replacement

T
Mavic just kinda...well fell out of the sky. Here are my logs.

B
Mini 2 Gimbal hitting/contacting front body of the UAV